Bingo Etiquette to Help You Get Started 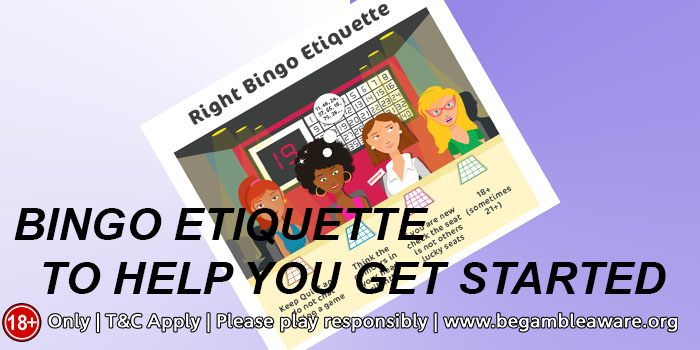 Originated in Italy in the 16th century, the game of Bingo has stood the test of time and still remains a firm favourite among gamblers across the globe. While other casino games are designed to bring the human brain into action, Bingo is perhaps the only gambling activity where the social aspect of the game is more important than the dynamics of the game itself.

Whether the game is played in land-based Bingo halls or via mobile Bingo applications, all players are obliged to follow some bingo rules. Keep reading to know more about the Bingo etiquettes that will ensure that the fun stays fun.

Bingo Etiquette in the bingo hall

As no two Bingo halls operate in an identical manner, chances are that the Bingo etiquette rules may vary from one to another. However, players would usually play Bingo at the same hall every time, making it easier for them to comply with the rules.

On arriving at the Bingo hall, you must read the posted rules before taking a seat at the table. These are commonly present in the form of handouts, and any additional rules related to a particular game can be found at the end of standard rules. Also, there’s no reason to worry if you’re a novice player. Most Bingo players are cheerful and social beings who will be more than happy to show you the basics of the gameplay.

Below are the common etiquettes you need to follow when playing the game in a Bingo hall.

Choosing where to sit

If you’re trying your hands at Bingo games for the first time and are politely asked to move, don’t be alarmed; it’s possible that the seat is someone’s lucky spot. Show courtesy and agree to take another seat – chances are that you might also find your lucky seat.

Keep the noise down

As Bingo is a highly interactive game, it’s no surprise that noise can get out of hand every now and then. But silence is important when the numbers are called. So, you must ask all your questions before the game begins, and if you need to query anything during the gameplay, you must do it in a quick manner so as not to disturb anyone for a long period of time. Also, abstain from asking your fellow player to repeat what the caller said because there’s a risk of missing the next number, apart from irritating the person beside you. 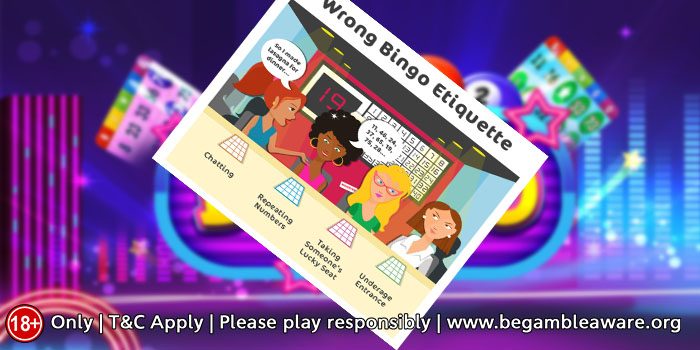 Keeping up with the pace

The most important task for novice players is to keep up with the speed of calls. Most players at the table will be Bingo veterans, so it pays to pick up the pace from the get-go. Be attentive and keep an eye on the numbers flashing up on the screen around you.

Think twice: Do you want to alter a Bingo card?

It may be tempting, but trying to alter a Bingo card is a no-go in the vicinity of experienced managers or callers who are exceptionally good at their work. They wouldn’t think twice about publicizing a player’s attempt to cheat throughout the entire Bingo hall. At times, they may even go as far as prosecuting to the full extent of the law. So, it’s always advisable to play it safe by following the rules and being honest.

When playing Bingo games, it’s important that you respect the caller. If you’re having a bad day or are experiencing a losing streak, then you should not blame the caller. They don’t have any influence on the numbers that are being drawn. Be heard only if the caller is too fast or when you can’t hear them. Also, be courteous while making requests, and if that doesn’t work, take up the issue to the manager.

When playing online Bingo games, always respect the Bingo chat host. Players who distract the host run the risk of losing their chat privilege for quite some time. Also, be respectful of other players – re-read what you’ve typed before sending as it could be misinterpreted and result in suspension. Everybody in the Bingo chat room is there to have some fun and you shouldn’t make anyone feel uncomfortable.

Keep in mind to never type in capital letters unless requested to do so by the host. Normally, only the chat host uses CAPS, the purpose of which is to distinguish themselves from other players, and it also ensures that players don’t miss any information given by the host.

If you have spent all your money, never ask other players for bonuses, gifts or cash. Doing so can get you banned from the Bingo site.

If you have any complaints regarding the gameplay, keep it out of the Bingo chat room. Complaining will only disrupt the chat and the host won’t be able to deal with it anyway. So, direct your issues to the customer support team of the site.