With the staggering rise in women gamblers, developers have started to launch female friendly online slots. These slots are designed and developed keeping in mind the feminine aspects and likings. Let’s look at the few such best online slots offered at Sailor Bingo. 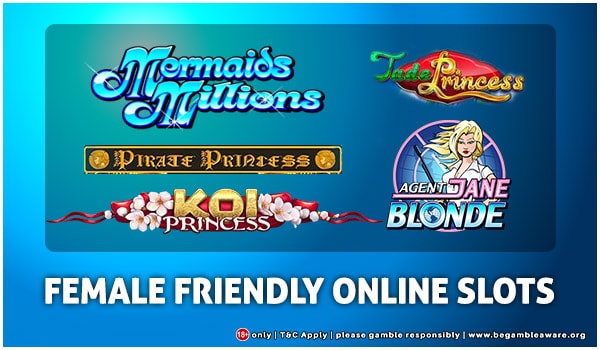 These classic online slots from Microgaming is a treat to play. With five reels and fifteen paylines, this slot is based underwater. A very interactive Mermaid Millions slot with the swiftly moving interface, this slot has various bonuses to offer. The high valued symbols include a pearl in a clam, jewels and seahorse. The mermaid acts as the scatter symbol, the treasure chest is the bonus symbol for the slot and the male mermaid acts as the wild. Three or more scatter rewards with ten free spins. Also, any win during the free spin round is multiplied by three. Three or more bonus symbol triggers the bonus game. The player needs to select from the various symbols, which rewards with some prize. A slot to get hands on!

This online slot from NetEnt has five reels and twenty paylines. The orientally themed slot has a manga touch to it, which makes it stand out from the herd. The high valued symbols include a dragon, koi princess, turtle and Chinese dollars. Golden dragon head is the bonus symbol whereas breaking wave is the wild. There are certain random features that get triggered randomly. The player must choose one from the three Kois, which awards with one of the following features: random wild feature, 5-hit random feature, a bonus feature and wild reels feature. Three bonus symbols activate the bonus feature which offers one of the following features:

An interesting slot with countless bonuses!

Having five reels and nine paylines, this slot from Microgaming is all about secret agents. The slot is laced with exciting gadgets such as x-ray glasses, wrist device, explosive gum, pistol, cocktail shaker, lipstick and a glass. It also has Agent Jane is various outfits like yellow catsuit, evening dress, snow gear, diver and a cat burglar outfit. The game’s logo is the scatter and jane’s headshot are the wild. Three or more scatter symbols rewards with 15 free spins. All the wins get multiplied by three in the free spins round. If a win has a wild symbol integrated into it, 2x multiplier is triggered. This slot boasts of superior graphics and interface and is worth a try!

Live it up with the Jade Princess

The slot has 5 reels and 40 paylines. It is a progressive jackpot slot. The dragon acts as the wild symbol and a spinning wheel with prayer etched on it acts as scatter. It also has a medallion progressive symbol. The slot has a free spin feature, which is triggered by three or more scatter symbols. 5,7,8,10,12,15,20 or 25 free spins are rewarded. Try the slot to experience the Asian royalty!

The slot from Eyecon has 5 reels and 25 paylines. Experience the thrilling seafaring life in this amazing slot. The symbols include a porthole, goblet, ship’s wheel and captain’s friend. The slot also sports parrot, pistol, sword, cannon, gold coins and treasure chest symbols. Jolly Roger flag, skull and crossbones rewards with 5, 100, 200 or 1000 coins depending on the number of symbols appearing. Pirate Princess is the wild symbol. The slot has three kinds of scatter: treasure map, cannon and pirate ship symbol. Three or more treasure map triggers a match and wins feature. Three or more pirate ships triggers ship battle pick feature. Three or more cannon symbol triggers free game feature. Explore the adventures of the pirate’s universe in this exciting slot!

Sailor Bingo is bundled up with different types of online slots, online bingo games, scratch cards and much more casino games designed with amazing themes which keep the player engaged throughout the gameplay! Join us now.