Top 10 Facts About Bingo Daubers You Need to Know 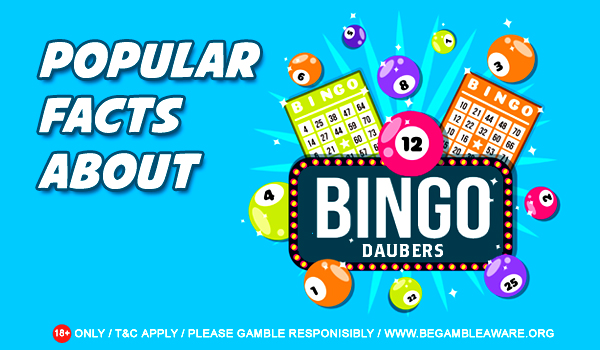 Bingo daubers are nothing but a special type of ink pen that are made just to mark on paper bingo cards. Unlike a felt-tipped pen, it’s simply a small plastic bottle that has a sponge-like tip at the top. The plastic bottle has translucent ink stored inside. When a number is called during a game of bingo, the player uses the dauber to mark the number on their card with a transparent circle of any other mark they prefer.

#1 - Beans were originally used as daubers

In the early days of bingo, players marked their numbers with beans. This gave the game its first 20th-century name — Beano. However, as the game became popular enough to have its own tournaments, a big drawback of using beans surfaced. Accidentally bumping the table could create a jumble of beans and a slew of inaccurately market bingo cards. It was only in the late 20th century that bingo daubers were developed.

#2 - Daubers have a wide variety of options

There are many different types of bingo daubers: disposable daubers, refillable daubers, plain daubers, and novelty daubers. You can find daubers which have nibs in the shapes of everything from the moon, stars, and hearts to footballs, superheroes, and superstars.

Such a wide combination of variations means we almost every player can have a dauber unique only to themselves, which is common in Bingo games. After all, bingo daubers are the main ways bingo players express themselves in a crowd of players.

A dauber’s capacity can range anywhere from 45 ml of ink to 120 ml or even more. The price of the dauber usually depends on its capacity, which is why occasional players go with lower-end daubers while aficionados prefer larger capacity daubers that last as long as four to eight sessions without needing a refill.

#4 - There are many more ink types than the standard version

What about it? Ink is one of the biggest ways one player’s dauber differs from another’s. If you’re playing a bingo game, your attention will be surely stolen by fluorescent ink daubers. These daubers come in vibrant colours like coral, lime green, lilac, and teal, and are perfect for the extroverted and fun-seeking players.

However, if fluorescent inked daubers aren’t enough, you can always go for glitter-filled ink. Though you should know that only novelty bingo daubers have glitter-filled ink in them. For players who don’t want all the attention, there are more subdued colours like magenta, purple, orange, and pink. Others can simply go for the standard Bingo pink.

#5 - Bingo dauber ink is not toxic despite being permanent

To serve its function, dauber ink is somewhat permanent. If you get it on your skin and clothes, you might want to use a special eraser or some special washing methods to tackle the problem. However, most of the dauber ink is not toxic. So, you can play relaxed and even let your kids play with the daubers for fun. But it’s best to always check before playing, just in case!

#6 - Bingo daubers can be used for other purposes than bingo.

With their popularity and convenience, bingo daubers have found their way outside of bingo halls. Today, you’ll find crafters, creative teachers, and DIY-ers everywhere using daubers for much more than just playing bingo games.

There have even been art projects, worksheets, and scrapbooks designed specifically to be used with bingo daubers. Some people, most children, even use daubers to dye their hair in all colours of the rainbow.

#7 - Bingo daubers are not so easy to find

We’ve established that bingo daubers are immensely popular, especially among bingo players. However, you’ll be unpleasantly surprised when you set out to buy your own. You won’t be able to find them in most stores near you and will have to settle for the basics that are available in bingo halls.

If you do want to find the right dauber for you, you should prefer Bingo supply websites, Amazon, and even eBay. Here, you’ll find a lot of varieties at attractive prices.

#8 - You can make your own Bingo dauber

You read it right! You can make your own Bingo dauber with the help of supply websites. You can use the component materials, inks, and tips included in the supply kits or use your own creativity to customize your dauber any way you want. If you’re worried about the mess caused during the removal of ink tips every time you run out of ink, you can take help of speciality tools available that help with the refill process.

#9 - Even online bingo has daubers

Even if you’re playing bingo on a screen, online bingo still lets you express your personality through a dauber of your choice. You can choose a virtual dauber from various shapes and colours available, just like you’d build a custom dauber for yourself. Needless to say, the same goes for bingo slots and mobile bingo games.

While they’re most commonly known as daubers, many people prefer to call them dabbers. There are even those who think dobbers is the correct spelling. The truth is that you can call this incredibly helpful tool whatever you want as long as you’re having fun using it.